I open my eyes as I hear the muffled traffic sounds outside my window and see the sun rays peeking through the shutter. I put on my white slippers and silky black robe and make my way to the kitchen. Coffee.

My friend Oana came to visit and it was also her birthday, so which better way to spend it than walking the streets of London?

We took the London Overground to Euston Station and embarked on the 6-hour walk around London’s Zone 1.

London St Pancras was opened in 1868 which means that 2018 marks its 150th anniversary. At first, the railway station was meant to connect London to other major cities in England, but now it is also the arrival point of Eurostar trains.

It has become a tourist destination because of its grand and elegant presence and the remarkable Victorian Gothic Architecture. In 2004 began its restoration and the Queen opened the restored Railway in November 2007. 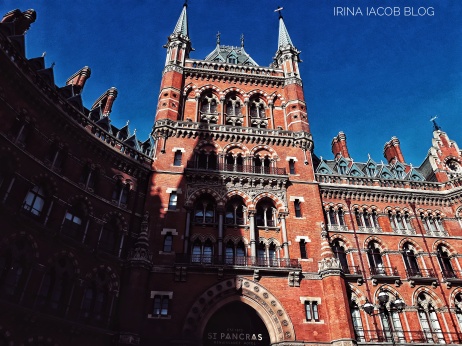 After gazing for some time at this beautiful station, we made our way to the British Museum, but first…coffee at Half Cup. 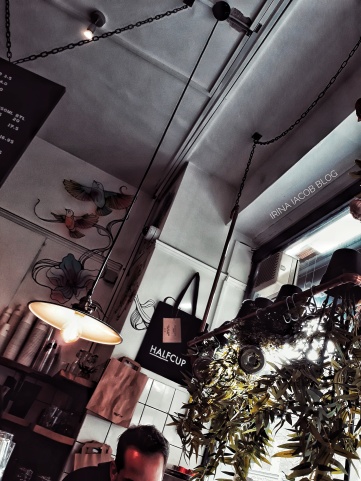 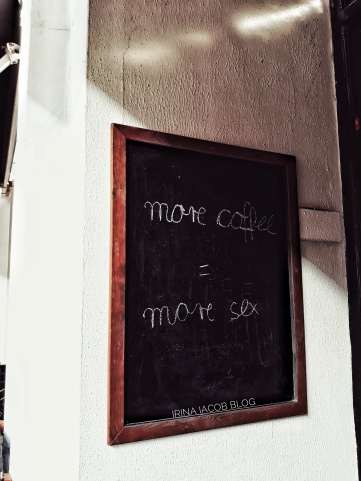 For this activity, you might need at least three, maybe four, hours to see everything it has to offer.

You can see Roman Britain, ancient Greece and the Parthenon, ancient Egypt with mummies and caskets, the Rosetta Stone, and ancient Iran. Medieval Europe, the Citi Money Gallery, which displays currency around the world, and ancient Assyria, all under one roof.

The entrance fee is free, but you can book tours online at http://www.britishmuseum.org/ such as the Highlights tour: “Around the world in 90 minutes” which costs £14* pp, or early one-hour tours for £30 pp. 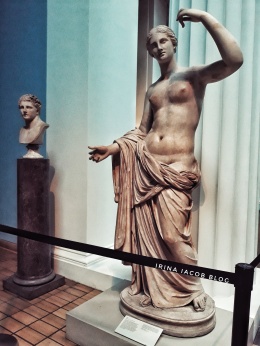 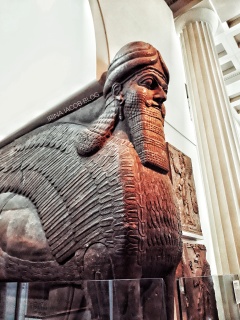 Before continuing our London adventures we stopped at Chopstix in Soho for some stir fry noodles and caramel chicken – proper fuel for the road ahead. 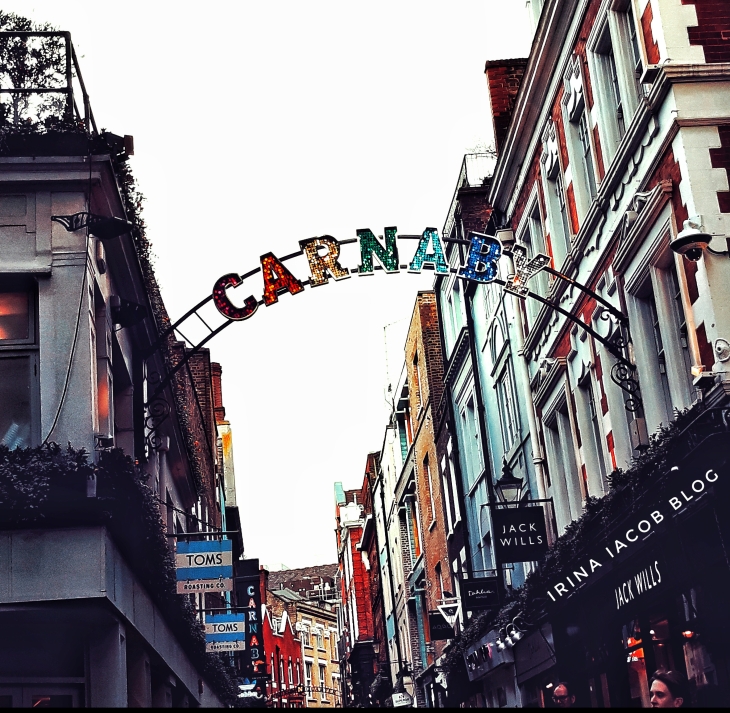 One of the prettiest shopping area in London. You have a variety of shops to choose from: clothes and shoes from Cheap Monday, Vans, Diesel and Levi’s to beauty and skin-care products from Too Faced, Pixi by Petra and Benefit. Attention all beauty lovers, you can even create your own Birchbox at their pop-up store right on Carnaby Street. 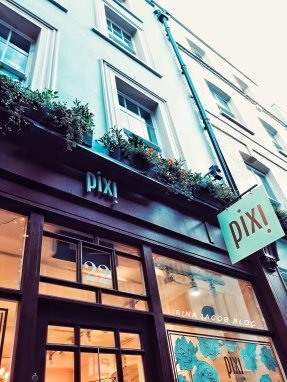 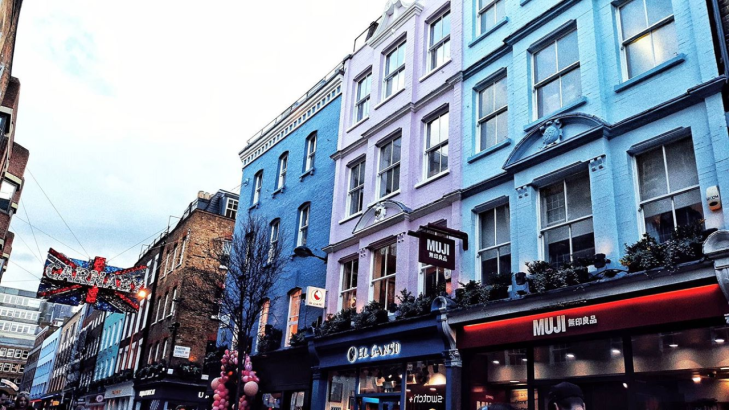 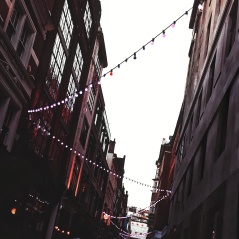 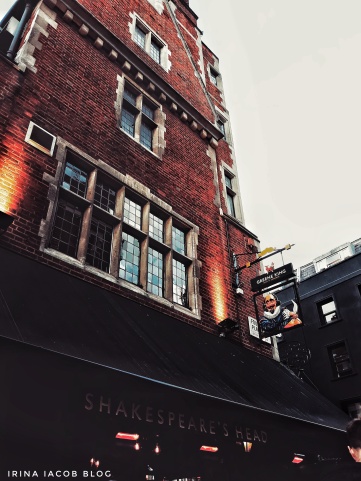 Oxford Street is London’s busiest street with around half a million daily visitors to 300 stores. It is especially beautiful at Christmas time.

Regent Street was the world’s first shopping street and it is said that “Regent Street now rivals the Champs-Elysées and Fifth Avenue as a world-class visitor destination.”

There is no need for further explanation, however, The Buckingham Palace has 775 rooms of which 52 are for the royal family and guests.

It has served as the London residence of the United Kingdom’s monarchs since 1837.

You can book a tour of the State Rooms for the “Summer Opening of Buckingham Palace” which is open from 21 July until 30 September 2018, for £24 pp or you can watch the guard change at 11.00 on Mondays, Wednesdays, Fridays, and Sundays.

Take a walk through St. James Park and admire all the beautiful birds, which all are protected by law, and playful squirrels.

You can sit on a wooden bench and admire the essence of nature – great place to relax and gain strength in order to wander around some of the most well-known attractions in the world.

Westminster Abbey is an architectural masterpiece and hosts each year more than one million visitors with an entry fee of £20 pp.

It has been started by Henry III and has seen 39 coronations.

Much work and detail have gone into it, and it is one of London’s most praised architectural and historical pieces of art.

The Westminster Palace is made of the House of Commons and House of Lords which are the Houses of United Kingdom’s parliament and is owned by the Crown, respectively the Queen.

Its history is really intriguing as the Palace was the home of the King’s of England before the fire that destroyed it in 1512.

After its restoration, it has become the meeting point of the Parliament.

The Houses of Parliament were destroyed in another fire in 1834 which lead to the construction of today’s Palace and tourist attraction.

If you visit the Palace of Westminster, you can book online tours for £20.50 pp or a guided tour for £28 pp.

When you think of London, the immediate image might be of the Big Ben situated in central London, in the exterior of the Houses of Parliament.

Until 2012 the tower was called the Clock Tower, but then it was named the Elizabeth Tower in order to celebrate the diamond jubilee of the Queen.

It took 34 years for the tower to be ready and the Great Bell is 200 years old.

Fun fact: Big Ben is the name of the Great Bell inside the Elizabeth Tower, but people refer to the whole tower as Big Ben.

Elizabeth’s Tower restoration started at the beginning of 2017 and is due to be finished in four years.

The London Eye, also known as the Ferris Wheel, is one of the highest points in London. The landmark has over three million visitors yearly. Londontopia says that on a clear that you can even see the Windsor castle.

If you have the patience to stand in an incredibly long queue, and then for 30 minutes take in the essence of the city of London from above, then this is the place for you.

The adult tickets are £27 pp. However, the view is astonishing and worth taking the time to visit it.

London Waterloo Station was first opened in 1848 under the name of “Waterloo Bridge station”. It is London’s busiest stations and has a total of 24 platforms with trains departing towards the South of England, with commuter services from Guildford, Kingston-Upon-Thames, Wimbledon, which have become crucial to London’s traffic.

There is always something happening at the Southbank Centre, from discussions and gallery viewings to street food festivals.

I remember last year I took my family to Southbank and there was a delicious food festival, I will leave a link here where you can watch a video from that adventure. 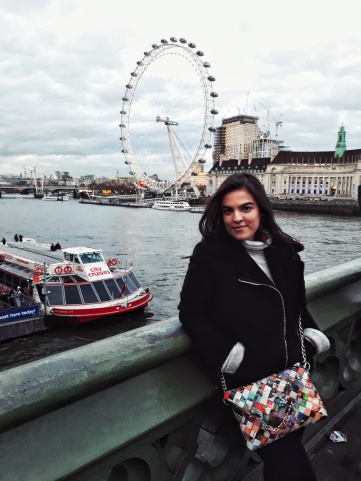 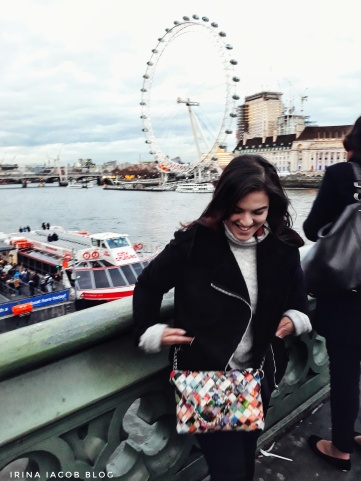 You can never get bored with London, there are a lot more attractions to list, but I will cover those in another blog post.

*Prices may vary depending on when you buy the tickets and are in accordance with information on the attractions’ websites.